Back to blog
Crypto-mining

Bitcoin is going off the charts right now. But why? And what does that mean? Justin Gauthier interviews Sergii Gerasymovych about his origins and, ultimately, what he's done with business and Bitcoin since moving from Ukraine to the U.S. on this episode of the Oil & Gas Onshore podcast.

From Ukraine to the U.S.

Sergii Gerasymovych first flew to the States for a summer job. He was in college in Ukraine, where he’s from. He remembers how cold the air conditioning was in the JFK International Airport in New York and then the 100-degree weather in Texas where he landed hours later.

Would extremes define his experience in the U.S. in other ways?

Sergii was always interested in finding solutions to supply needs, and this passion carried forward as he’s ventured through multiple entrepreneurial projects. The idea of building a business to the point of leadership in its industry has always fascinated him.

At the time of that first summer internship, Sergii imagined his business life would revolve around linguistics. He studied languages and, after his summer job was finished, Sergii returned later to the U.S. to start a translation agency.

It was the entrepreneurialism that had him hooked, however, not the languages.

Shortly after his venture into the translation business, Sergii started looking for new opportunities to build more businesses. He even tried his hand at ecommerce. It wasn’t until 2015, however, that he discovered the new frontier with the room to grow that he was really hungry for.

The Art of Business…in Bitcoin

Sergii spent the better part of a decade working his way across businesses. From translation to ecommerce, and later to hardware distribution, he learned that any business can be run by the same rules:

Marry those things together, and Sergii was in the “art of business” with the feeling that he could start anything.

It was no surprise, then, the curiosity that it generated when a client of his in Europe began placing large orders for video cards to his hardware company. The year was 2015, and Sergii’s current project was distributing computer equipment. But he had never seen requests for so man graphic cards.

So, he looked into what kind of business would require orders so large. He soon discovered that the only business necessitating this volume of graphic cards was Bitcoin mining.

That answer, of course, raised even more questions for Sergii. He had heard of Bitcoin but had only just discovered the world of Bitcoin mining. The computer processing power required to mine was enormous, and Sergii thought, why shouldn’t my business provide the hardware needed for this?

Of course, a new passion was part of the equation, too. The more Sergii learned about Bitcoin, the more he was energized by it. The nature of the decentralized cryptocurrency would leave an enormous and positive impact on the world, and Sergii wanted to be part of it. 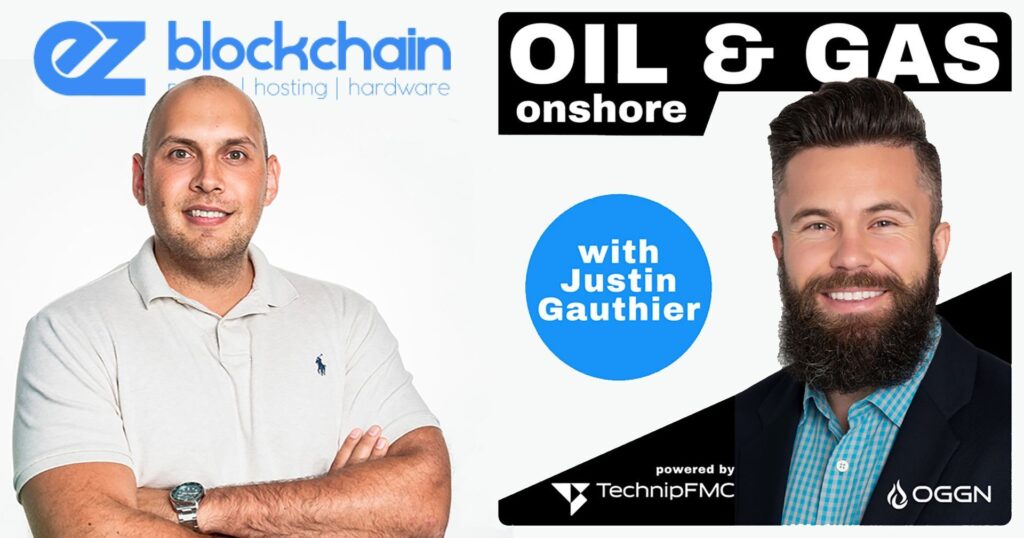 By 2017, Sergii and his business partner wanted to see if the same market for Bitcoin mining equipment existed in the United States. They became official distributors of mining equipment (from a physical infrastructure aspect) and EZ Blockchain was born.

Though Bitcoin is unique, it does share a side effect with a few other new technologies today: the consumption of power is not easily met. To generate Bitcoin, mining is done on special computers that are notoriously power-hungry.

So, Sergii saw that they needed more energy.

He found that energy, and it was remarkably just siting around. In the U.S., a practice called “flaring” is the standard in the oil and gas industry for how stranded natural gas is disposed of after released when drilling for oil. Fields without the infrastructure to transport that gas to processing sites have nowhere to send or store it, and the resulting flaring disposes of so much natural gas that it reaches a quarter of natural gas consumed in electricity each year.

Who would have thought that cryptomining could solve that problem?

Sergii saw the opportunity to solve gas flaring while also monetizing the lost asset of stranded natural gas. EZ Blockchain would do this by creating mobile mining containers that could be installed at oil fields with an independent generator to process the gas otherwise flared.

Today, this activity has branched off EZ Blockchain into its own new brand, EZ Energy.

There are multiple ways EZ Energy partners with oil and gas companies around the country, including:

The horizon of blockchain mining and energy is an inspiring one. Sergii’s exceeded his initial dream of entrepreneurism with EZ Blockchain at the front of the pack with this technology. What’s next? Listen to this interview on Oil & Gas Offshore and then decide for yourself.

Learn more about Sergii’s path to crypto and the groundbreaking news in the industry by listening to the full Oil & Gas Onshore episode.